Teen Mom Amber Portwood nearly took her own life. In the hospital, she confessed to downing pills and trying to hang herself. 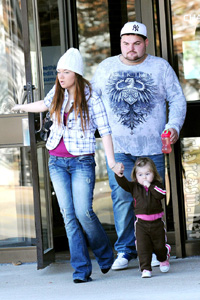 Teen Mom star Amber Portwood is in the hospital after she almost killed herself. Portwood put a noose around her neck and told emergency responders that she had taken a large number of pills.

Police in Anderson, Indiana confirmed the reality star was hospitalized for her suicide attempt. This morning, police stated that a “relative” at another location called the police department to report Portwood was in trouble at her home. Supposedly, that relative was Gary Shirley, Portwood’s longtime on-again, off-again boyfriend and baby daddy.

“According to the caller, 21-year-old Amber L. Portwood was depressed and threatening to end her life,” the police statement read. “The victim, who did not appear to be injured, was transported to a local medical facility for further evaluation.”

Portwood was found at her home lying face up on her sofa with a noose tied loosely around her neck. She was slipping in and out of consciousness and moaning. She was transported to the hospital, and, not long after her arrival, Shirley showed up at the hospital. According to one report, his visit lasted five minutes.

On Teen Mom, Portwood assaulted Shirley in front of the cameras, slapping and choking him. Recently, she pleaded guilty to felony domestic battery charges and was sentenced to probation. Prior to that, she lost custody of her daughter, Leah, to Shirley.