Just when serial dater Hugh Hefner was ready to settle down and tie the knot with Crystal Harris, his bride-to-be had a change of heart. No worries, Hef’s exes are here with well wishes to mend his broken heart.

While not everyone could understand what 24-year-old Crystal Harris saw in 85-year-old Playboy mogul Hugh Hefner, a trio of blondes are sad to see their ex-boyfriend’s wedding plans dashed. 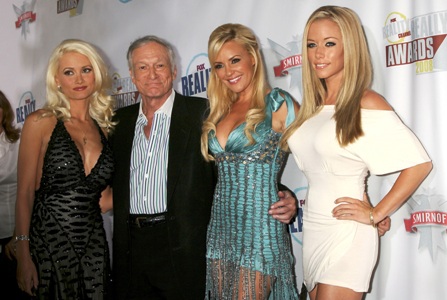 Kendra Wilkinson, Bridget Marquardt and Holly Madison, formerly of the television show Girls Next Door which chronicled their lives as Hugh Hefner’s girlfriends, have all reached out to comfort their ex after he was dumped by runaway bride Crystal Harris.

Bridget Marquardt, seen here smiling in between Hugh Hefner and his fellow girlfriends in 2008, tweeted these words to her former flame: “Just stopped by the mansion 2 give @hughhefner a hug. He seems to be handling this well. He even had a sense of humor about it! #LoveUHef”

Kendra Wilkinson, now the wife of football player Hank Baskett with whom she has a son, tweeted these words to her former boyfriend: “We r comin over w some jack n coke. Oh, n a pipe lol.”

Holly Madison seconded Kendra’s message, while adding a few words of her own as well. “U r too sweet,” Holly tweeted Tuesday afternoon. “Wish I was there to support, too!”

Looks like even though the Girls Next Door no longer live next door, they’ve still got Hugh’s back!

Think Hugh Hefner will have any trouble moving on from Crystal Harris?