The term Shaq Attack has a whole new meaning as the retired basketball star is being questioned over his involvement in the kidnapping of a man by gang members, who were trying to get back a sex tape of Shaquille O’Neal and a woman that was not his wife Shaunie. 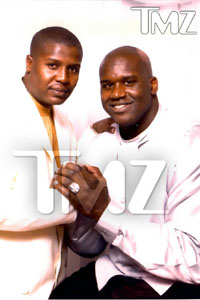 Kidnapping, Crips gang, sex tapes, oh my! Shaquille O’Neal is in a big ol’ mess for an incident that happened in 2008. Let me break it down for you.

Law enforcement sources confirm to TMZ that seven members of the Main Street Mafia Crip Gang in LA, including Ladell Rowles who is friends with Shaq, tried to get back a sex tape that featured Shaq and a woman — that was not his wife at the time, Shaunie.

The man that had the sex tape was Robert Ross (pictured, right, with Shaq), who at one time had a business deal with Shaq over a record label in which he was to get 50 percent of any deals he gets. Ross was feeling bitter that he was not given any money after delivering Ray J to Shaq. In the meantime, while married to his wife Shaunie, Ross says that Shaq would bring women over to Ross’ home and have sex with them — and the action was caught on tape by a “security camera.” Ross reportedly said he would release the sex tape unless Shaq paid him what he was owed for the record contract deal.

The police report states that seven gang members surrounded Ross at a convenience store and used guns to force him back into his car. They “pistol whipped” Ross and told him to give them the sex tape. They also took Ross’ Rolex, diamond chain and earrings, as well as $15,000 in cash.

The seven gang members have been arrested with a charge of robbery and kidnapping, among other crimes. They are being held in jail while waiting a preliminary hearing.

Shaq is being interviewed by the LAPD to determine his involvement in it, however, his name is currently not listed as a suspect.

Tell us: Do you think Shaq enlisted the gang members to get his sex tape back?