Will Jennifer Lopez return to American Idol? The pop star says she hasn’t decided yet. 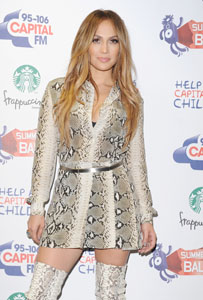 Despite the fact that Randy Jackson says all three judges will return to American Idol next season, Jennifer Lopez reveals she actually hasn’t quite decided yet.

When asked by BBC Radio if she would return to the judges’ table next season, Jennifer Lopez replied, “I don’t know. I haven’t been forced to make a decision and I’m glad about that because honestly I’m very on the fence about it.”

“I had an amazing time doing it and I love it but I have a lot of other things happening, and it’s going to come down to me making a choice of what I want to do for the next year,” Lopez said.

Perhaps her salary has a little something to do with it: Lopez was the lowest paid judge on American Idol this season, pulling in $12 million compared to Steven Tyler’s $18 million. Randy Jackson pulls in about a bazillion gazillion dollars for being the last of the original judges.

What could Lopez have going on that’s so much better than American Idol? She is currently voicing the character of Shira in Ice Age: Continental Drift which is due out in 2012. She’s also keeping busy trying to block the release of a sexy tape she made with her ex-husband. Wonder what else she has up her sleeve?