Chris Evans is the new cover boy for July’s GQ. You won’t believe what he got the writer to do! 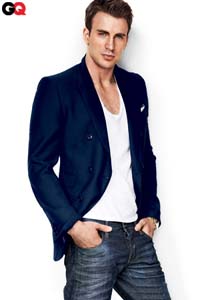 Mega-hottie actor Chris Evans made the cover of the July issue of GQ — and naturally, he looks great. However, the real meat of his cover story isn’t the cover — it’s the story inside.

Writer Edith Zimmerman was tasked with writing about the Captain America actor, and it’s clear that she has more than a little crush on him.

“Since we’re both single and roughly the same age, it was hard for me not to treat our interview as a sort of date. Surprisingly, Chris did the same, asking all about me, my family, my job, my most recent relationship. And from ten minutes into that first interview, when he reached across the table to punctuate a joke by putting his hand on top of mine, Chris kept up frequent hand holding and lower-back touching, palm kissing and knee squeezing,” Zimmerman wrote.

“He’s an attractive movie star, no complaints. I also didn’t know how much I was supposed to respond; when I did, it sometimes felt a little like hitting on the bartender or misconstruing the bartender’s professional flirting for something more. I wanted to think it was genuine, or that part of it was, because I liked him right away.”

While we can’t say we wouldn’t do the same, we probably wouldn’t write about it, although she did have some self-awareness about her assignment.

The subsequent set of interviews included lots of — you guessed it — drinking. Zimmerman even passed out at Evans’ house from a night of drinking.

“When I awoke at 5:30 a.m., I slipped quietly out the front door, Googling ‘cabs la,’ ‘taxis los angeles,’ ‘help me california,’ on my phone. I was still kind of drunk and had no idea where I was, but there was something peaceful about the heavy, flowery air and the fog and the birds chirping and my heels clicking. No cab companies answered, and no cabs came by. But eventually a very pretty, blonde, possibly Asian transsexual and her much younger male friend pulled up to make sure I was okay,” she wrote.

Tell us: Would you pass up the opportunity to drink with Chris Evans?