Hugh Hefner has announced he won’t be getting married this weekend, after all. His girlfriend has left him at the altar! 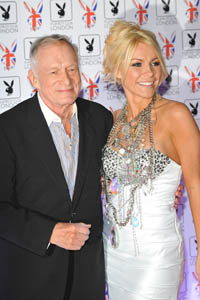 Hugh Hefner was planning on getting married this weekend, but his girlfriend Crystal Harris has called the nuptials off.

“The wedding is off,” Hefner announced on Twitter today. “Crystal has had a change of heart.”

A source says Hefner is heartbroken. “The wedding is off and everything has been canceled. Hef is in shock. Crystal bailed and left the mansion at 11 p.m. Sunday night.”

What caused Hef’s Playmate gal pal to get cold feet and run? Reportedly, Hefner, 85, and Harris, 24, had a major fight last weekend over the phone. The wedding was supposed to happen this Saturday, but Harris grabbed her things and moved out of the Playboy Mansion instead.

Was their age difference a problem? It could be, but there may be more to the story than that. Harris is rumored to have left Hefner for Dr. Phil McGraw’s son, Jordan McGraw.

“She has a boyfriend,” says the source. “She is seeing Dr. Phil’s son, Jordan. She thinks she is going to be living with all of Dr. Phil’s millions.”

Back in March, Harris and McGraw were spotted getting cozy at the Chateau Marmont in Los Angeles, California. Harris was still wearing her engagement ring and calling herself Hefner’s fiance, but it seems there was more going on than that.