Pippa Middleton is saying au revoir to England and moving to France! 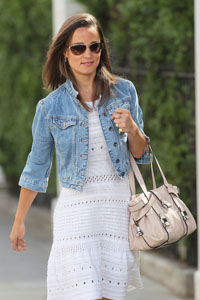 Pippa Middleton is saying au revoir to her boyfriend — and her country! Just a day after it was announced that Pippa broke up with her boyfriend Alex Loudon, sources say that Kate Middleton‘s scene-stealing sister is packing up and moving to France!

“She is keen to spend some time living abroad — she’s a massive fan of the south of France and hopes to work there and have a base there a bit more permanently,” a source told The Sun.

“But Alex doesn’t have the same dream as Pippa. He’s quite happy being in London, so it’s not something he’s keen to share with her.”

Pippa is said to be hoping to hone her event-planning skills while on the Continent — a natural fit as her parents own a huge party supply business.

“She’s an amazing social networker and wants to throw the biggest and best parties. She’d love to work on events around the Cannes Film Festival,” said the source.

Pippa Middleton will spend the summer abroad and return to London in September. How would you like to escape to the south of France for the summer after a breakup?

read on for more pippa middleton