Selena Gomez kicked off her Monte Carlo tour yesterday which marked her first public appearance since her hospitalization for nausea and a severe headache. 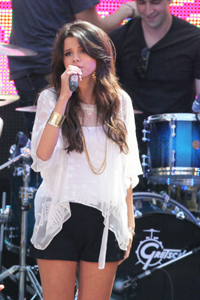 Selena Gomez looked healthy and rested at her Monte Carlo tour kick-off, which was a relief to fans who were worried about the Wizards of Waverly Place star after she was hospitalized last week for nausea and a severe headache.

“I was just very malnourished,” she told reporters. “Low on iron and exhausted.”

Gomez, 18, was forced to cancel her original Monte Carlo kick-off date on June 11th due to illness, causing some to speculate if she was pregnant with Justin Bieber’s baby. No Bieber baby is on the way (whew!), however, her boyfriend did tweet his get-well wishes to her. She is remaining coy on whether he sent get-well flowers, only saying: “I got very lovely things from my family and friends.”

Gomez thanked her fans during her Santa Monica appearance, saying: “If you guys came on Friday, I’m so sorry that I couldn’t be here… I love you guys very much.”

Gomez will continue with her 10-date Monte Carlo tour and she reportedly has 30 interviews, including a Good Morning America performance, scheduled for this Friday!

Gomez’s mother is reportedly worried about her schedule. “Her schedule is insane,” an insider tells PopEater. “She is one of the hardest working people in show business but now even Selena knows she needs to slow down. You have no idea how much work goes into promoting a record or a film.”