Jake Pavelka and Vienna Girardi are reuniting for the second season of ABC’s show Bachelor Pad 2.

On June 13, ABC made its official announcement in regards to which former contestants of The Bachelor and The Bachelorette will be competing on Bachelor Pad 2. 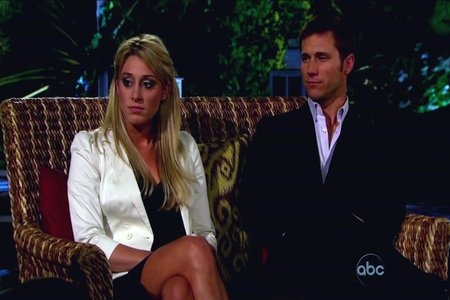 Former in, then out, of love duo Jake Pavelka and Vienna Girardi made the cut. Everyone remembers their explosive tell-all interview where Vienna Girardi stormed off the stage in tears, right? Wonder how they’ll make it living in a house competing for $250,000.

Bachelor Pad 2 kicks off on August 8 and includes other notable names from ABC’s popular franchise including Michelle Money who’s been in the current bachelorette’s ear, Ashley Hebert.

The casting isn’t complete as of yet, as the network is still in the process of adding three cast members from Ashley Hebert’s season which is currently airing.

We have our fingers crossed that Bentley will be showing his face on Bachelor Pad 2 so he and Michelle Money can duke it out. Eh, that’s not really out of the realm of possibility in our minds.

Check out the current cast list below and weigh in on who you are excited to see on Bachelor Pad 2.