Candy Spelling has finally sold the huge mansion Tori Spelling grew up in — and you’ll never believe who bought it! 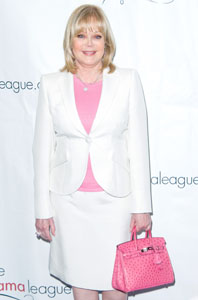 After sitting on the market for two years, Candy Spelling finally sold the ridiculously humungous mansion she shared with her late husband, legendary television producer Aaron Spelling — the not-so-humble home in which Tori Spelling grew up.

The 4.7-acre property features a 56,500-square-foot main house, the ubiquitous pool and tennis courts, its own barbershop, gift wrap room, automated projection room, bowling alley, flower-cutting room, wine cellar, koi pond, citrus orchard and parking for 100 vehicles, as well as a kitchen suitable for cooking for up to 800 guests and a servants’ wing for seven.

So who bought it? Someone with scads of money, that’s who. An heiress, in fact. Twenty-two-year-old Petra Ecclestone, daughter of billionaire Formula One racing boss Bernie Ecclestone, has reportedly made a deal to snap up the palatial estate.

The home is currently in escrow — but did Ecclestone pay the entire $150 million asking price? Sources say the heiress opened with an offer of $75 million, but since Candy Spelling has refused to lower the price at all for the last two years we think she stuck to her guns.

By the way, Candy has already moved out of the manse and is shacked up in a cozy 15,555-square-foot Century City penthouse worth $35 million. What, did you think she was going to move in with her pregnant daughter? Tori has bigger fish to fry after her car accident and rant against the paparazzi yesterday.