The boys of The Bachelorette packed their bags and met Ashley in Thailand for the next phase of their dating extravaganza.

One group date, two individual dates and the beaches of Thailand. That’s what went down on this week’s episode of The Bachelorette. 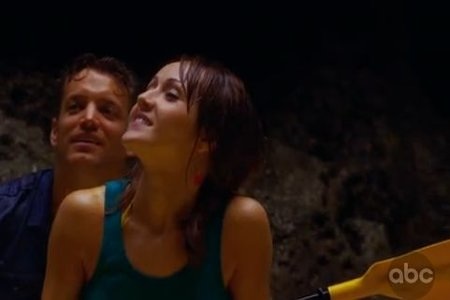 Oh, and Ashley wouldn’t stop talking about Bentley and how she thinks she’s lost the connection with the guys because of his exit. Yikes, girl, you have other hotties to love on, forget that guy!

Individual date one: Ashley and Constantine

First, Ashley honored Constantine with one of the individual dates. It didn’t start off so well. The weather cancelled their plans to enjoy a private beach, but there was something equally cozy on the horizon.

After going with the flow and just hanging out on the streets of Thailand, the duo got some advice from a street vendor — “Love is not about winning.” Apparently he doesn’t watch the show. The two kept that theme in their heads as they enjoyed doing “normal” things that other couples do, like enjoying food and running through Thailand. We totally do that all the time.

Their quaint day quickly turned into a steamy evening as Ashley and Constantine addressed their budding feelings for each other and ended up walking hand-in-hand on the beach while Ashley pinned a rose on Constantine.

Ben F., J.P., Blake, Mickey, West, Ben C., Nick, Lucas, William and Ryan got chosen to participate in a group date that actually gave something back to the people of Thailand — working on an orphanage for kids who fell victim to the 2004 tsunami. It kind of felt like a bash-on-Ryan day mixed with some charity. The guys really don’t like Ryan at all. 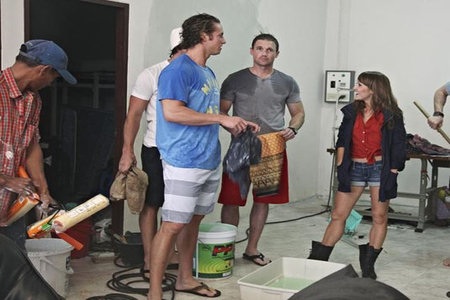 Back at the evening party, Ashley got some one-on-one time with Ben F. and J.P. and let us tell you — there was some smooching going on. According to Ashley, kissing J.P. is “magical.” Her “best” kisses by far.

Ryan made everyone jealous by stealing Ashley right before she was set to delve out the rose but it was pretty anti-climactic.

Guess who got the group date rose? It was totally Ben F. and not Ryan. Of course, Ryan blames it on the fact that the other guys would have flipped out — whatever.

Ashley and Ames boarded a boat to the island of love on their individual date! Ashley learned more about Ames’ spontaneous and witty nature as they overlooked the water of Thailand.

They took their good-time boat ride off the water and on to the shore for some champagne and chit chat. The date picked up in the evening where the two did a stare-down at the rose sitting before them. We’re starting to think Ashley loves giving out those date roses because she gave one to Ames instead of saving it for later.

Instead of bowing out of the cocktail hour because she was still reeling over Bentley, Ashley went in knowing she needed to make sure the guys wouldn’t do what Bentley did last week.

She questioned West over his ability to get married after his wife’s death and chatted with Lucas about his divorce. She was on a mission to make sure everyone was on her side.

She also pulled Ryan aside to address his perky nature and she found out the rest of the guys think he’s putting on a show. He claimed his smiles are real and there’s nothing fake about him — she bought it.

Ryan was our pick from the beginning, so are we being duped too? Guess we’ll have to see.

In the end there was a rose twist — an additional rose for the ceremony to make sure she doesn’t leave with regrets. Only one guy was going to be sent packing. We already know she gave roses to Ames, Ben F. and Constantine. The remainder went to Lucas, Ryan, J.P., Nick, Mickey, Blake, William and Ben C.

Poor West was left sulking on the limo ride back to the airport.

Are you missing Bentley? We did hear a lot about him during the episode. Hopefully that will end soon, but from the looks of next week’s preview he’ll be back sooner than we’d like. What did you think of this week’s episode of The Bachelorette?