Tracy Morgan apologized again for his homophobic remarks and says he wants to return to the scene of the crime to make amends. 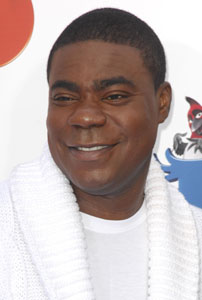 Perhaps being reminded by 30 Rock costar Tina Fey that he’s in the wrong business to be bashing gays brought Tracy Morgan back to his senses. The comedian is apologizing again for his homophobic remarks and says he wants to return to Nashville to make amends.

Tracy Morgan told GLAAD, “I know how bad bullying can hurt. I was bullied when I was a kid. I’m sorry for what I said. I didn’t mean it. I never want to use my comedy to hurt anyone. My family knew what it was like to feel different.”

“My brother was disabled and I lost my father to AIDS in 1987. My dad wasn’t gay but I also learned about homophobia then because of how people treated people who were sick with that. Parents should support and love their kids no matter what. Gay people deserve the same right to be happy in this country as everyone else. Our laws should support that. I hope that my fans gay, straight, whatever forgive and I hope my family forgives me for this.”

Morgan also says he will return to Nashville to meet with the audience members who were appalled by his anti-gay remarks, make a public statement about supporting the LGBT community and shoot a PSA for GLAAD’s Amplify Your Voice campaign.

Says GLAAD President Jarrett Barrios, “By not only apologizing, but sending a message of support for gay and transgender people, Tracy will help many realize that no one should be treated differently or subjected to violence.”

“It is so important that Americans hear from allies like him as well as gay and transgender youth shunned by their families and parents who have lost their only children to anti-gay violence. We look forward to working with him on spreading this message to Americans.”

Tell us: Is Tracy Morgan’s turnaround too little, too late?