Jim Carrey had a field day performing opposite his penguin co-stars in Mr. Popper’s Penguins.

Mr. Popper’s Penguins is based on the 1938 novel written by husband and wife team Richard and Florence Atwater. Jim Carrey is Mr. Popper and in the film version, things are a little different than in the classic book. Carrey sat down with SheKnows for a video interview to tell us all about his popping penguin adventure that also stars Carla Gugino and Angela Lansbury. 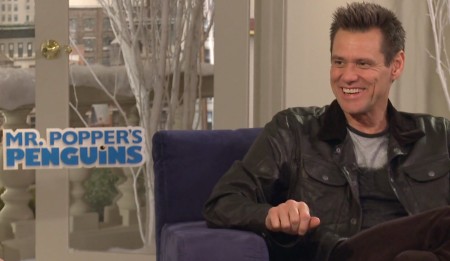 Jim Carrey puts the “A” in A-list celebrity as the actor’s career includes some of the most popular films of all time.

After leaving his native Canada, he arrived in Los Angeles and famously wrote a check to himself for $10 million in hopes it would inspire him to rise to the top of the Hollywood heap. To say it worked is an understatement — from his first gig on the big screen in 1982’s Once Bitten to his star-making turn on In Living Color. But, it was his role in the 1994 smash Ace Ventura: Pet Detective that sent his star into the stratosphere as the blockbusters came fast and furious.

Since then, he has scored major hits in comedies and a few dramas including this year’s I Love You Phillip Morris opposite Ewan McGregor. 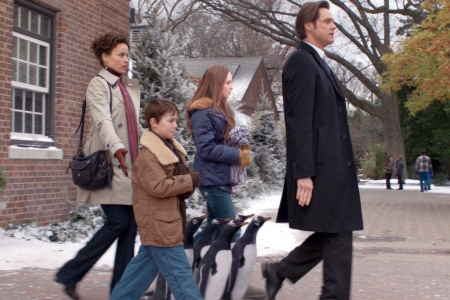 With Mr. Popper’s Penguins, Carrey is back being his silly self in a family comedy that is sure to charm the entire clan. Carrey tells us exclusively about the challenge of doing his iconic improv opposite penguins who don’t care what kind of Hollywood power you have and he gives us the inside scoop about what it meant to him to star opposite a legend in Angela Lansbury.