Kim Kardashian and company returned last night for the sixth season of their E! reality show, Keeping Up with the Kardashians.

The season premiere of season six of Keeping Up with the Kardashians drew in 2.5 million viewers, which was down from last year’s premiere of 4.7 million — but still not too shabby. 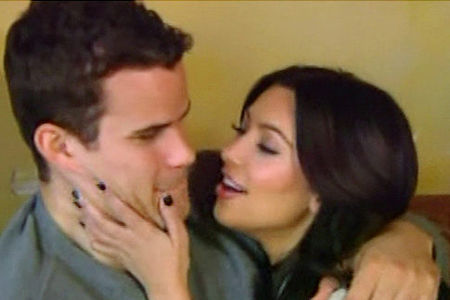 If you missed last night’s premiere, then I’m sure you will be sad you missed Kim Kardashian and her fiancé, Kris (not to be confused with her mom, also named Kris), and their deep conversation in which they burped… into each other’s mouths. Say it with me — gross!

“Birds throw up and then feed it to their children. This is nothing,” Kris said.

So who pursued who? Kris said it was Kim who went after him. “I felt like I was the prey and you were the predator,” he said.

Kim has a deep conversation with her sisters on baby names. “Are you naming your kids with ‘K’ names?” Kim asked. Khloe, who is married to Lakers star Lamar Odom, plans on naming all her daughters with names starting with K, while all her sons will have names starting with L. Kim, of course, said she wanted dibs on all the best K names. The newly engaged Kim reportedly plans on getting pregnant “by the end of the year.”

Kourtney and Scott attempted to have a family game night, however, it didn’t go as planned when mama Kris couldn’t make it because she was working and Kim went to New York to be with fiancé Kris.

Keeping Up with the Kardashians airs on Sundays at 10 p.m. on E!

Check out the trailer for season six of Keeping Up with the Kardashians: