Kate Middleton made a splash as usual at the Order of the Garter ceremony — with a little help from her new stepmother-in-law Camilla Parker-Bowles.

Kate Middleton attended the annual Order of the Garter ceremony with her new family, looking elegant in a dove gray frock coat and fascinator hat, but she needed a little help from her new family to give the crowd what they wanted. 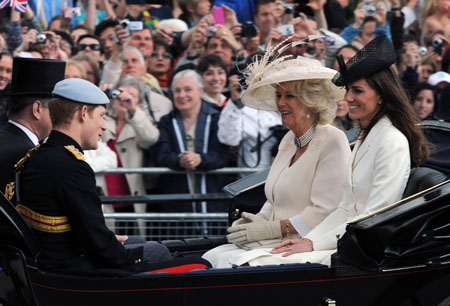 The photo above is from the day prior, during the Trooping the Color ceremony.

The Duchess of Cambridge arrived at the Order of the Garter ceremony in a burgundy Rolls Royce but quickly stepped under a canopy at the chapel — out of the sun, but also out of sight!

Stepmother-in-law to the rescue! Camilla Parker-Bowles, an old hat in the ways of wooing a crowd, quickly stepped in and guided Kate Middleton back into view.

“To start with she was tucked away, but she came to the fore and looked very elegant and composed. She held her own,” Irene Mason, from Purley-on-Thames, told People.

Prince William was inducted into the Order of the Garter in 2008, becoming the 1000th Knight of the Garter. The exclusive order only allows 24 members at any given time.