Clarence Clemons, saxophonist for the E Street Band, is responsive after suffering a stroke.

Clarence Clemons is responsive after suffering a stroke, according to the Bruce Springsteen and E Street Band website Backstreets.com. 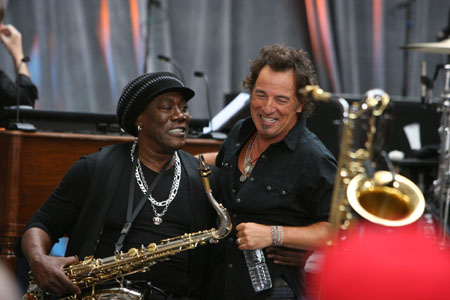 “Yesterday (Sunday), it did not look good at all. Today… miracles are happening,” the website quoted an unidentified friend of Clemons as saying. “His vital signs are improving. He’s responsive. His eyes are welling up when we’re talking to him. He was paralyzed on his left side, but now he’s squeezing with his left hand.”

Attempts by SheKnows.com to reach Clemons’ representative for comment were unsuccessful.

Clemons, the famed saxophonist for the E Street Band, suffered a massive stroke over the weekend in Florida. He’s currently in stable condition following two brain surgeries in a Florida hospital, according to the report.

He has a lot of people pulling for him, including Lady Gaga, who tweeted: “Little monsters, my very close friend+musician on The Edge of Glory Clarence Clemons is very sick. Can we all make some get-well videos?” Clemons plays on Gaga’s The Edge of Glory and he contributed an instantly identifiable sax solo to her recent American Idol performance.

Clemons was a man “on the mend,” recovering from surgeries to his back and knees, during April’s Garden State Film Festival in Asbury Park, said fest spokesperson Lori Draz.

“There was absolutely no indication (of an illness) other than he was on the mend,” said Draz. The festival debuted the Clemons-starring documentary film Who Do I Think I Am? A Portrait of a Journey on April 2. “He was bursting at the seams to have this moment.”