Angelina Jolie poses with “no makeup” while holding her own perfectly weathered Louis Vuitton bag in Cambodia for their new “Core Values” campaign. Hmm… I think I spot some smoky eye shadow on Jolie — do you?

There were apparently no stylists or makeup artists on the Cambodia shoot for Angelina Jolie’s new ad for Louis Vuitton. Wearing her own clothes, reportedly makeup free and holding her own six-year-old Louis Vuitton bag, Jolie strikes a pose in Cambodia’s Siem Reap province. Photographed by Annie Leibovitz, Jolie’s new ad is for their “Core Values” campaign. 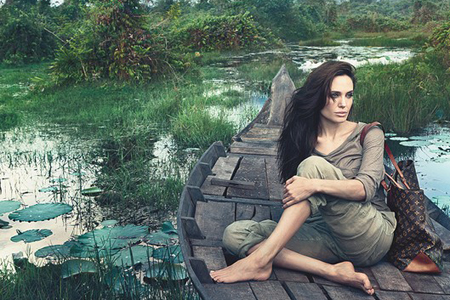 I know Leibovitz is a genius behind the camera, but I’m pretty sure that Jolie is not completely makeup free, as they claim. I believe I spot some smoky eye shadow and perhaps a smudge of lip gloss? True, her skin can naturally be that flawless sans makeup — but can her eyes looks like that without a bit of eye shadow? Perhaps they meant to say she had a “natural” look instead of “makeup free?” Regardless, the photo is beautiful.

“People are not used to seeing Angelina in this situation,” Pietro Beccari, Vuitton’s executive vice president, told WWD. “I like the fact that it’s a real moment. This travel message we give through personal journeys is a fundamental one for the brand.”

Jolie was reportedly paid millions for the ad, however, Beccari would not confirm, only saying she did donate “an undisclosed portion of her fees to charity.”

Cambodia holds a special place for Jolie, as it is where she adopted her son Maddox, who is now nine-and-a-half years old. She and Brad Pitt have also established a foundation in Cambodia. In fact, Maddox may have been at the photo shoot as WWD reports that four of her kids were there — and had to be “shooed” out of the shot!

As for her own Louis Vuitton bag in the photo — the Alto carryall — which Jolie has been photographed with for many years, Beccari says it is no longer in production but “we are considering to re-edit it.”

You can check out the ad in the International Herald Tribune, as well as other publications, beginning on Wednesday. Other celebrities that have posed for Louis Vuitton’s “Core Values” campaign include Bono, Madonna, Jennifer Lopez and Scarlett Johansson.