Pregnant Tori Spelling had a terrible scare Monday morning, when she says the paparazzi caused her to wreck her car while taking her kids to school. 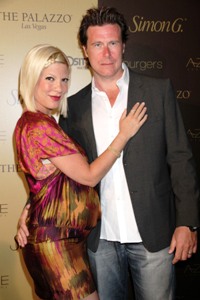 Tori Spelling, pregnant with her third child, is rightfully angry at the paparazzi she says caused her to crash her car while on the morning school run. The 38-year-old took to her official Twitter page to share the frightening incident.

“Paparazzi chased me w/the kids 2school,” Tori Spelling wrote Monday morning. “I was trying to get away from him and had a pretty big accident. Took down whole wall of school.”

Amazingly the paparazzi didn’t give up even after the crash. Tori continues, “He [then] STILL got out to try to get pics. 10 school moms chased him away. Wht will it take? Someone dying for paparazzi to stop?”

Tori Spelling, due in October, decided to play it safe after wrecking her car by getting herself and her unborn baby checked out. “Going to dr now to check on baby,” she wrote. “I think its just shock.”

No further Twitter updates from Tori have yet been posted.

Despicable to think Tori, her unborn baby, four-year-old son Liam or two-year-old daughter Stella could have been harmed over photographs of the school drop-off. Here’s hoping everyone walks away from Tori Spelling’s car crash unharmed!