Dakota Fanning appears in a new ad for the Marc Jacobs perfume Oh, Lola! Is the photo too sexy for the teen? 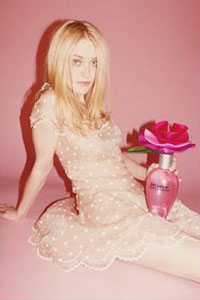 Sexy isn’t the first word people think of when they hear the name Dakota Fanning. The actress has never cultivated that image, focusing more on her craft than on her sultriness. Maybe that’s why her new ad for the Marc Jacobs perfume Oh, Lola! is creating such a stink.

The ad seems innocuous enough — Fanning is not provocatively dressed, nor is she bent over or even licking her lips. In fact, the seeming innocence of the shot is what makes it so controversial.

“When we were speaking about who to use in the ads,” Jacobs told Women’s Wear Daily, “I had recently seen The Runaways… I knew she could be this contemporary Lolita, seductive yet sweet.”

Lolita, of course, is the sexually precocious fictional 12-year-old in the Vladimir Nabokov novel of the same name.

In the ad, Fanning wears a sweet but short polka dot dress and poses with the large, flowering perfume bottle propped phallically between her legs. Although shot by longtime Jacobs collaborator Juergen Teller, the ad has the feeling, particularly due to the lighting, of a low-budget 1970s skin shoot a la photographer Terry Richardson.

Perhaps it is somewhat shocking because we remember Dakota Fanning as a child? She isn’t the little girl we met in I Am Sam anymore — the 17-year-old Twilight star graduated from high school last week.