Pippa Middleton is suddenly single after breaking it off with Alex Loudon. What caused the split — and who do we think Kate Middleton’s younger sister should date? Get the scoop here! 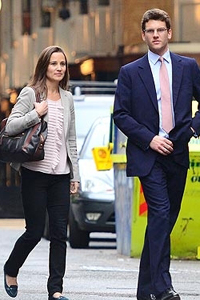 Even though Alex Loudon was Pippa Middleton’s “plus one” to the royal wedding of her big sister Kate Middleton to Prince William, sources are saying that the couple has split.

“It is common knowledge in their close circle of friends that Pippa and Alex have recently split up,” a friend tells the Times of London.

Pippa, 27, seemed like a good fit with Alex, 30, who was a professional cricketer before becoming a successful broker, however, trouble may have been brewing for some time since the couple has not been seen together for weeks.

“Pippa has become very high profile and it’s put a strain on things. They’re moving in different circles,” The Sun quotes a source as saying.

Was another man responsible for the breakup or was it the topless photo controversy? Or perhaps Pippa is taking after her big sister and trying to marry her way into a royal family? She has been spotted with the wealthy Duke of Northumberland, 26-year-old George Percy. In fact, the couple hung out at his place and didn’t leave until 2 a.m. He was spotted giving her a hug in the early morning as she was leaving.

I’m still holding out hope for Prince Harry. They did seem to get along fabulously at the royal wedding.