Neil Patrick Harris wrapped up the 65th annual Tony Awards last night with, well, a rap! If you missed the show, NPH laid it all out for you and SheKnows has the clip and the lyrics. 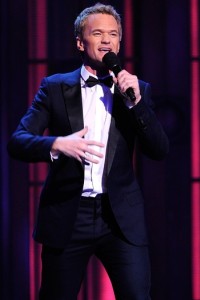 SheKnows already gave kudos to the 2011 Tony winners, including the South Park boys’ sweeper The Book of Mormon, and also gave Neil Patrick Harris a shout-out for his hysterical Tony opener, “Put down your Playboy and pick up your Playbill — it’s not just for gays anymore!”

If you want to get the full wrap-up on what went down at the Tonys June 12, 2011, however, NPH took care of that, as well. The host with the most closed the night by rapping a wrap-up written by In the Heights writer-star Lin-Manuel Miranda and director Tommy Kail.

In a night full of rocking performances, showstopper and best performer Tony award winner Norbert Leo Butz (Catch Me If You Can) absolutely deserves mention; but Neil Patrick Harris stole the night with three fantastic numbers, including the opener, that adorable duet with Hugh Jackman and the NPH “Rap Up,” which was reportedly his first ever attempt at rapping.

Get the story on the Tonys straight from host Neil Patrick Harris. Here’s a clip of NPH’s closing rap, followed by the lyrics to his premiere performance.

Here are the lyrics to NPH’s Tony Rap Up, written by Lin-Manuel Miranda and Tommy Kail:

Tomorrow, if anyone asks you what happened at the Tonys, you can say this:

We straightened things out in the opening number,

Daniel Radcliffe kicked some butt, and we were so elated

Even Voldemort was sad he wasn’t nominated 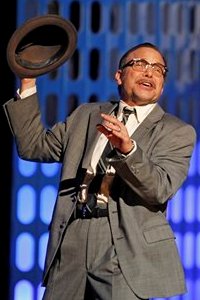 Norbert Leo Butz sang and danced and tried to catch ya, comin’ atcha

Chasing Trey and Casey ’cause they nabbed a Tony statue

Commencing in the Chattanooga station

From the grand imagination of the Kander-Ebb collaboration

It takes a lot for a recipient to humble me

But everybody cried for gorgeous Nikki James, the bumblebee

Andrew Rannells sang I Believe and he landed it

All across the country, from the north and to the south

John Larroquette brought an eloquent mood to the room

They sang a ballad, we didn’t need protective gear

And Memphis is relentless, they’re performing every year

The Normal Heart won, Larry Kramer made us weep 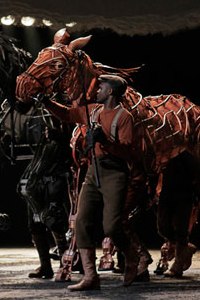 And War Horse dazzled us with a theatrical sweep

And tapping a full-on assault attack

Go ahead and roll the credits if you need to

I’m out of control, I’m on a roll, this is my Tonys speed-through

Anything Goes took the best revival prize in stride

That guy can do it all, his follow-up is Fanny Bryce

Par for the course,

Someone get a car for the horse

And in the final analysis, what survives tonight?

Theater, because it’s what we live, we’re changing some lives tonight

And theater thrives because we live to give it, so to speak

This ain’t reality TV, this is eight shows a week

Every chorus member that you saw tonight tappin’

Had to make miracles happen

For a chance to see you clappin’

And applauding in the audience. What’s next? Who knows?