Dartmouth graduates received a dose of comedy along with their diplomas this past weekend, courtesy of comedian Conan O’Brien. 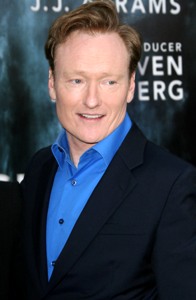 Conan O’Brien withstood chilly weather to share his words of wisdom with Dartmouth’s graduating class of 2011 on Sunday. In classic Conan O’Brien style, the 48-year-old hit on all that was wrong with the world during his speech, including his place at the podium while President George Bush sat behind him.

“I must point out that behind me sits a highly admired president of the United States and decorated war hero, while I, a cable television talk show host, has been chosen to stand here and impart wisdom,” said Conan O’Brien. “I pray I never witness a more damning example of what is wrong with America today.”

Continuing with the mockery for all present, Conan played down the honorary degree he was awarded. “My first job as your commencement speaker is to illustrate that life is not fair,” he said. “For instance, you have worked tirelessly for four years to earn the diploma you’ll be receiving this weekend. And Dartmouth is giving me the same degree for interviewing the fourth lead in Twilight. Deal with it.”

Conan O’Brien’s Dartmouth commencement speech wasn’t without life lessons, however. Along with a few lines on how life isn’t fair, the talk show host told the graduates, “Like many people, I thought that achieving that goal would define me as successful. But that is not true. No specific job or career goal defines me, and it should not define you… whether you fear it or not, disappointment will come. The beauty is that through disappointment you can gain clarity, and with clarity comes conviction and true originality.”