A new trailer for Jon Favreau’s Cowboys and Aliens has been released and it’s amazing! The sci-fi action flick stars Harrison Ford and Daniel Craig — two men with a steady history of fighting bad guys. Indiana Jones and James Bond are saddled up and ready for battle! 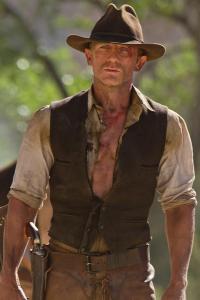 In Cowboys and Aliens, Daniel Craig plays Jake Lonergan, a man who’s lost his memory and has no idea where he is or how he got there. Lucky for him, Olivia Wilde and Harrison Ford are there to help but for their own selfish reasons. Wilde wants to know more about Jake’s powerful new bracelet, while Ford needs help finding his son.

In the new trailer, Craig joins forces with Wilde, Ford and Sam Rockwell to take on the aliens who kidnapped their loved ones and wiped his memory. There’s plenty of action that includes lots of gunplay. Once again, this is Daniel Craig, so we shouldn’t be surprised that he knows his way around a weapon.

The rest of the Cowboys and Aliens cast includes Paul Dano, Clancy Brown, Adam Beach and Keith Carradine. The film is directed by Jon Favreau and scheduled to hit theaters on July 29. Will you be there?