Ryan Reynolds is at the top of his game in Green Lantern, and rightfully so as no one can pull off hero meets sexiest man alive meets funniest person in the room quite like Reynolds can.

Fresh off of Buried, where Ryan Reynolds spent most of the film trapped inside a casket, Green Lantern was a confining experience of a different kind, he tells us. You see, Reynolds is afraid of heights and since he spends much of the film flying attached to wires, someone needed to conquer a fear. Fitting, since the main theme of the film is overcoming fears and channeling your true will. By the end of shooting, Reynolds was flying high screaming for more wire work! 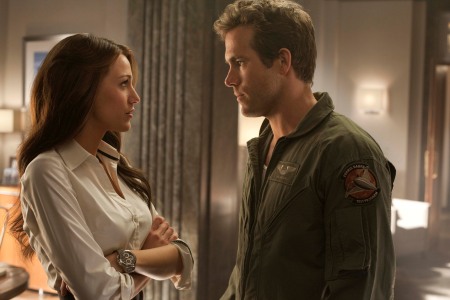 Reynolds plays both the Green Lantern and his alter ego Hal Jordan alongside Blake Lively, a fighter pilot with a touch of attitude. But, he carries it off with priceless charm and self-deprecating wit. Certainly sounds like a certain actor’s true life persona. In person, Ryan is hysterical, handsome and high on life — just as you’d imagine. Reynolds took a few minutes at the Beverly Hilton recently and dished his world and the universe of Green Lantern.

SheKnows: You have a fear of flying, and this film is about the struggle between fear and will. How did you use your will to overcome your fear in terms of doing the wire work and such?

Ryan Reynolds: On the third day, they basically fired me 200 feet in the air at 60-feet per second. That got me over it right quick. Without an adult diaper or anything, I just did it [laughs]. But then after a while you’re playing on these wires — and they’re so articulate — these things. The technology for that alone is amazing now. You’re moving left and right and up and down. I was actually getting, dare I say, a little cocky with it by the end. I was wondering if we could actually find some way to transport me back to my hotel each day on the wires. I loved it. The fear of flying in a plane thing, that’s a whole separate issue. I’m being told to get on a commercial airliner and trust a drunk pilot, and I don’t like that. I can’t see what’s in front of me, and there’s maybe some control issues there mixed with a few little daddy issues, I don’t know. This is not the right place to be talking about this! Come on. Let’s get it together [laughs].

SheKnows: [Laughs] If you could be a superhero, what scourge would you want to wipe from the planet?

Ryan Reynolds: I’m a pretty ardent environmentalist, so for me it’s all those issues that go along with that, under that umbrella: global warming, foreign oil, and oil, in general, I would try to correct that. 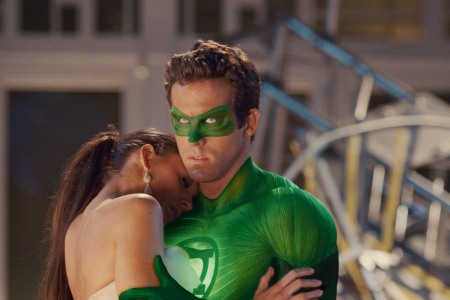 SheKnows: How do you think Green Lantern differs from the superhero universe that’s out there on screen?

Ryan Reynolds: The thing I distilled from diving into that mythology and that universe is that there’s a tone that’s a little bit different — it’s a bit of a throwback in that sense. There’s a lot of fun with the character in Green Lantern. He’s not a character that’s overly funny, but he’s witty. I always say he’s that guy who can throw a punch, tell a joke and kiss a girl. There’s something really iconic and fun about that guy, because anything’s possible with that guy. For me, there wasn’t any particular narrative or storyline because we were telling an origin story in this film. It was mostly just tone, mostly just finding out who Hal Jordan was.

SheKnows: How was filming in New Orleans and across Louisiana?

Ryan Reynolds: New Orleans is one of the most exciting, incredible communities in the world. There’s such a rich culture and history — there’s innumerable things to do. It was actually the exact worst place you want to bring a bunch of ne’er-do-well actors to shoot a big budget movie. Thankfully, everybody reeled it in and kept it contained. For me, it’s any time you step outside of your house in New Orleans, you’re going to see something incredible. You’re going to see some of the best music, jazz, food and entertainment in the world. That’s a city that keeps getting knocked down, but they just keep getting back up. There’s a real spirit there that amazes me to this day.

SheKnows: After filming much of the movie with a green screen, what are your thoughts now that you’ve seen the finished product?

Ryan Reynolds: For me it was incredible, because I was shooting in basically a box for a good portion of the movie that was green screen. To see these guys, these immensely talented artists — who are world builders — create this universe around me that I’m interacting with in a very real way was mind-blowing. I’ve never been a part of anything like that. It was a feat of engineering unto itself. That was pretty spectacular, that first time. I saw it in 3D as well. I was practically weeping — pretty incredible.

SheKnows: How was making Buried, where you were in a box the whole time, versus working on a big-budget Hollywood comic book movie in Green Lantern? 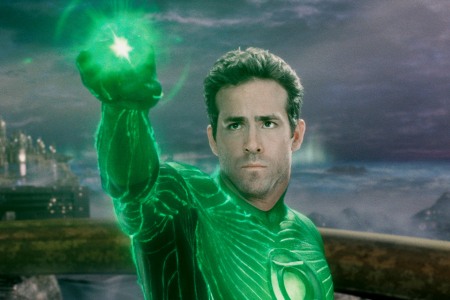 Ryan Reynolds: The two movies are more similar than not, actually, in the sense that Buried involved a lot of imagination. The people that I was talking to on the phone the entire time, they’re not on the phone with me. In Green Lantern, I went from working in a small, wooden box to a large, blue box — it didn’t feel too dissimilar. I’d never worked on a movie that required this much imagination. It felt like I was a kid again [laughs]. Everything you’re seeing in this world, you have to imagine.

SheKnows: What are your thoughts on comics? Did you grow up with them?

Ryan Reynolds: By 2014, I’m going to do Wonder Woman, but after that I think I’m gonna hang it up [laughs]. I’m gonna hang up the lasso and the short, short shorts. Growing up I read a bit of X-Men stuff and I loved Deadpool (who Reynolds played in X-Men Origins: Wolverine). My brother introduced me to Deadpool, and that was a character I loved. Beyond that I didn’t know that much about comics. Those are the ones I stuck to. Deadpool is a character I love and I got a great opportunity to play him in more of an ancillary sense in a film, which was great, because it allowed me to jump in and play him, but then not be committed to too much beyond that. I do have that film that’s in development still, and we’ll see what happens with that. But, for the most part, Green Lantern’s the first real iconic superhero role that I’ve ever had the great opportunity to play, and I’m pretty damn grateful for that.

Ryan Reynolds: What makes a guy sexy? I’d say individual for everybody — I always think that self-deprecation can be charming and sexy.