Neil Patrick Harris was the talk of the town after he nailed it as host of the 65th annual Tony Awards last night. In case you missed it, check out his opening performance guaranteed to bring on the LOLs! 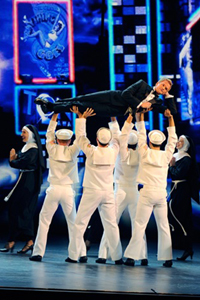 Neil Patrick Harris got the Tony Awards off with a bang with his hilarious opening act, “Broadway: It’s not just for gays anymore.”

“I’m teen heartthrob Neil Patrick Harris. I would like to deliver an important message to everyone who cares so deeply about this community,” he says before breaking into his performance.

“Put down your Playboy and pick up your Playbill — it’s not just for gays anymore!” he sings.

He then goes into the star-studded audience and points out “straight” people who are at the Tony Awards. “Angela Lansbury,” he jokes. “You’re super-straight. Are those things real?”

He walks over to Stephen Colbert, who sings a line about enjoying the Tonys with his “female woman wife.”

“You’re super hot!” he says to Brooke Shields. “You made me think I was straight for like 23 years!” Shields was then supposed to sing a line, however, she flubbed her line and had to start over. And then had to start over again — this time picking up her note card to read it as she sang it. Ouch! At least her hair and her dress looked fab!

In case you missed it, South Park creators Matt Stone and Trey Parker were the big winners of the night, picking up nine Tonys for The Book of Mormon.