Hailee Steinfeld won the role of Juliet in Romeo and Juliet, but a love scene in the movie is causing a controversy for the young actress. 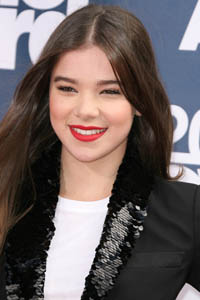 Hailee Steinfeld will be playing Juliet in an upcoming adaptation of Shakespeare’s Romeo and Juliet, but will the 14-year-old True Grit star be nude in the film?

After it was announced Steinfeld would star in the romantic tale, it was revealed the script called for a racy love scene in which Juliet was to be nude.

“They start undressing each other — slowly, gently and carefully until they are naked,” the script reads. “They are eternal figures in a Raphael painting. Romeo then carries her to bed, kissing her again and again as they explore uncharted territory. Then they make love, transported into each other’s soul.”

When the ladies of The View got wind that a teenager would be disrobing for this steamy scenario, they expressed their disgust.

Now it turns out that the script has been rewritten for Steinfeld due to her age.

“In the original adaptation… there was a lovemaking scene that included nudity for the married Romeo and Juliet. This script was written with a 20-year-old actress in mind,” the film’s director, Carlo Carlei, said. “As soon as Hailee Steinfeld was cast, all nudity and lovemaking have been excised from the script. It will be romantic and age-appropriate for a 14-year-old.”

Steinfeld, who has been acting since she was eight, beat out 15,000 other actresses for the role of Mattie Ross in True Grit, for which she won an Academy Award nomination for Best Supporting Actress.

Should nude scenes have an age requirement?