Oxygen debuted The Glee Project on Sunday night, so look out — school’s back in session. 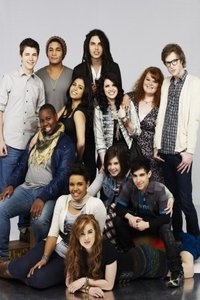 Oxygen debuted The Glee Project June 12, which hopes to add a fresh-faced Glee hopeful to season three (in seven episodes) as the other misfits of Fox’s hit show get set to age. The Glee Project’s premiere focused on the 12 contestants and their restyling of Katy Perry’s Firework video. Super-hot Warbler Darren Criss (Blaine) also popped up. It made us giggle with glee!

The group had to take one line of the song Signed, Sealed, Delivered and make it their own. Glee’s Darren Criss got the honor of helping pick a winner for this challenge. Did we mention we love Darren Criss? Okay, off topic.

Matheus got the individuality award of the night. What was his prize? A big role in their Katy Perry Firework redo. We were a bit nervous hearing they would be putting their own stamp on the singer’s video, but we were also curious.

They hit the dance studio like pros and brought their best when meeting with the vocal peeps and the judges/mentors, which included Glee’s casting director Robert Ulrich, choreographer Zach Woodlee and vocal guru Nikki Anders.

For the video, each hopeful once again got a line fit for them. The Glee pros didn’t hold back in telling The Glee Project students when they sucked.

Ellis, Bryce and Damian got picked as the worst by the judges once the video was completed. They then had to perform in front of Glee creator Ryan Murphy in order to stay in the show.

Ellis had to perform Big Spender, Bryce took on Bruno Mars’ Just the Way You Are and Damian tackled Jessie’s Girl.

Ryan Murphy axed Bryce from the competition, meaning he won’t get the prize of a spot in season three. It’s a seven-episode feature so that was kind of a big blow.

Did you catch the premiere of The Glee Project? Tell us what you thought.