The Real Housewives of Orange County got real during part one of their Bravo reunion special. What juicy fan questions were answered during the typically explosive Bravo franchise’s special? Let’s just say one lady’s former husband shared a few secrets and another pointed a finger at Gretchen Rossi’s jealousy.

The Real Housewives of Orange County’s Vicki Gunvalson, Tamra Barney, Gretchen Rossi, Alexis Bellino and Peggy Tanous joined Andy Cohen on the reunion couch for some dish and sass. The talking points of part one of the reunion included Tamra against Gretchen and Alexis, Vicki’s marriage and Alexis’ financial situation. 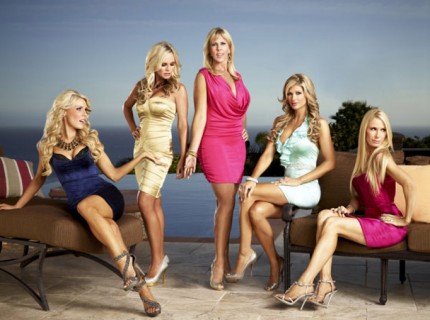 Tamra vs. Alexis and Gretchen

The first order of business on everyone’s mind was the steamy bathtub scene between Tamra and Eddie. Tamra first clarified that she and estranged husband Simon were two weeks away from their divorce being final at the time of the reunion. That didn’t stop the women from weighing in about Eddie and Tamra’s love of the bathtub.

Peggy thought it was perfectly acceptable for Tamra to be with Eddie on TV in that intimate of a way and Vicki viewed it as an act of “beautiful love.” Alexis and Gretchen had other thoughts.

Gretchen pointed the finger at it being inappropriate and Tamra pointed her finger right back claiming jealousy. Alexis went a little deeper insinuating Tamra’s children know more about Eddie than she probably thinks and Tamra might want to shelter them a bit more. The best line of the reunion is Tamra saying a judge granted an order that forbids her children to watch Bravo — commence the jokes, people.

All of the children talk prompted Tamra to bring up Alexis’ children falling in a pool while in their strollers. Okay, she actually used the word “dropped” in the pool. The claws came out later in the show when Tamra threw her two cents in about Alexis’ financial situation.

Alexis claims she lost all the value of her home so she and her husband sold it and they’re paying cash for a new one– case closed. Tamra claimed the real dish is that they transferred the house to a business loan and filed bankruptcy on the business loan. For those of you who are in the financial world, please explain the point of all that.

For anyone who thought Tamra’s claws had retracted after all that, she still had a little fight in her to take on Gretchen some more. She questioned Gretchen’s relationship with Slade and the two went head-to-head over the “evil bitch” name-calling and then Tamra accused Gretchen of being obsessed with her on her blog — meow, ladies.

Tamra is saying there is a truth out there that Gretchen needs to admit to in regards to her sleeping with another man while she was in a relationship. Didn’t we already hear all this last time?

Vicki sets the record straight on her marriage

Vicki took the hot seat, answering questions about her failed marriage. She said she lost her love for Donn but she would have chosen a successful marriage over money any day. She also let us in on Donn’s temper, but it didn’t end there. She also revealed she is dating a really good guy and fully took responsibility for shutting down during the marriage.

Donn appeared in a pre-taped interview saying he found out Vicki filed for divorce when he was served at the office and was completely shocked. Donn said she made up all the rules and it’s how “Vicki rolls.” He said Vicki should feel bad that she hurt him and that he didn’t think it went down with “class or dignity.”

Did you catch The Real Housewives of Orange County’s reunion? We thought it was a bit tamer than usual but there is always part two that’s set to air Monday, June 13. In the meantime, check out SheKnows’ own Whitney English in her exclusive interview with Gretchen Rossi.