British singer Lily Allen has married her longtime boyfriend Sam Cooper — and the couple shared some incredible news on their special day! 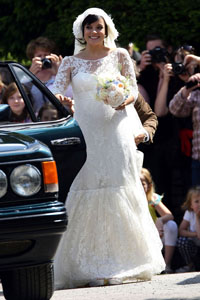 It’s a beautiful day for British singer Lily Allen — not only did she marry her love Sam Cooper, but the couple revealed that Lily is pregnant!

Allen and Cooper tied the knot at St. James the Great Church in Cranham, England and threw a country reception for 300 guests in the garden of their nearby mansion.

Lily wore a lace gown and unique headpiece by French designer Delphine Manivet and was sporting a noticeable baby bump as she walked down the aisle. Turns out she is 16 weeks pregnant!

The baby news is joyful but harrowing for the 26-year-old star, who has suffered two miscarriages. Her first, in 2008, occurred when she was pregnant by Ed Simons of the Chemical Brothers. The second miscarriage in late 2010 nearly killed her — she was rushed to the hospital suffering from blood poisoning caused by infection.