Tina Fey is speaking out against homophobic anti-gay remarks made by her 30 Rock costar Tracy Morgan. 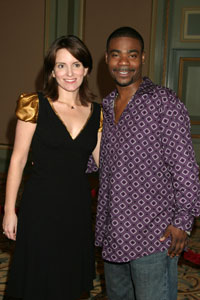 The ever-witty Tina Fey has taken her 30 Rock costar to task over Tracy Morgan’s incredibly hateful and violent homophobic remarks made during a stand-up routine in Nashville earlier this month.

“The violent imagery of Tracy’s rant was disturbing to me at a time when homophobic hate crimes continue to be a life-threatening issue for the GLBT community,” Tina Fey said.

“It also doesn’t line up with the Tracy Morgan I know, who is not a hateful man and is generally much too sleepy and self-centered to ever hurt another person.

“I hope for his sake that Tracy’s apology will be accepted as sincere by his gay and lesbian coworkers at 30 Rock, without whom Tracy would not have lines to say, clothes to wear, sets to stand on, scene partners to act with, or a printed-out paycheck from accounting to put in his pocket.”

Know who else is totally not amused? Morgan’s bosses at NBC. In a thinly-veiled threat, NBC Chairman Bob Greenblatt said, “Tracy’s comments reflect negatively on both 30 Rock and NBC — two very all-inclusive and diverse organizations — and we have made it clear to him that this kind of behavior will not be tolerated.”

Which may have something to do with why Tracy Morgan issued this apology:

“I want to apologize to my fans and the gay and lesbian community for my choice of words at my recent stand-up act in Nashville. I’m not a hateful person and don’t condone any kind of violence against others.”

“While I am an equal opportunity jokester, and my friends know what is in my heart, even in a comedy club this clearly went too far and was not funny in any context.”

Morgan gets to keep his job — for now.