Now that Super 8 is finally in theaters, it’s time for J.J. Abrams to focus on his next sci-fi adventure — Star Trek 2! The sequel we’ve all been waiting for is finally within our grasp. 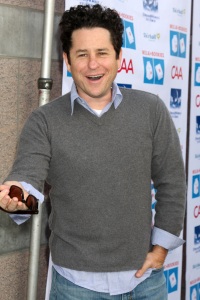 At the premiere of Super 8, J.J. Abrams gave a little update on his next big movie. When asked about Star Trek 2 he said, “We’re working on that right now. I hope to have some information soon.” The director is currently collaborating with Paramount to come up with a production plan and schedule.

The big question we all have on our minds is whether or not he’ll return to direct the sequel. He did such an amazing job with the first film; it’s hard to imagine anyone else taking over. So far, Abrams is undecided but optimistic. He said, “I would hope so, but we’ll see. No decisions [have been made] yet, but I look forward to having the answer soon.”

“Soon” is the key word here. Could it refer to next month’s Comic-Con? Or does he plan on announcing it through a press release? Like everything else J.J. Abrams does, the possibilities for Star Trek 2 are endless.

Don’t miss our interview with J.J. Abrams and his comments on the Star Trek sequel!>>