Estella Warren has been formally charged in her shocking DUI case. 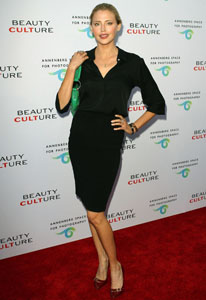 Estella Warren’s DUI arrest has just gone from bad to worse. The Planet of the Apes actress has been formally charged not just with drunk driving, but also with a hit-and-run, battery on a law enforcement officer and resisting arrest.

Luckily for Warren, those are all misdemeanors.

Warren’s troubles stem from a May 23 incident in which she smashed her Toyota Prius into three parked cars, accused the bewildered owners of stealing from her, left the scene of the accident, failed a field sobriety test, kicked the arresting officer, slipped out of her handcuffs and ran out the back door of the police station. Yowza.

The only reason Warren is not being charged with felony escape is due to a lucky technicality: She had not yet been booked into the system at the police station.

If convicted, Estella Warren faces two-and-a-half years in prison. She is currently free on $100,000 bail.