Fresh off of Friday Night Lights, Kyle Chandler dove into J.J. Abrams and Steven Spielberg’s Super 8. Chandler recently sat with SheKnows for an exclusive talk on the magic that is Abrams and Spielberg, as well as the unique challenges brought to him as an actor while working on a set shrouded in such secrecy. “I desperately wanted to tell people about this film,” Chandler admitted. “But, there was no way I could.”

Kyle Chandler has handled momentous challenges on a set many times in his career and succeeded every time. He was charged with stepping into the large shoes of Billy Bob Thornton as the head football coach in Friday Night Lights when the film was adapted for the small screen. Now, when audiences think of Friday Night Lights, they more often think of Chandler than Thornton! 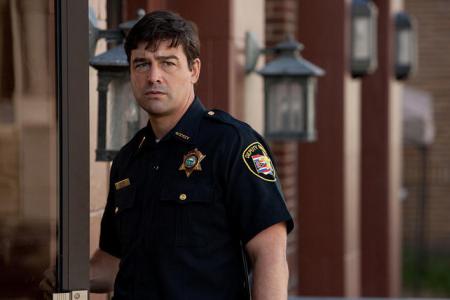 A similar effort was required of the actor when he waltzed onto the Super 8 set of the super-secret next project of J.J. Abrams, co-creator of Lost, Alias and the man behind the highly successful, rebooted Star Trek.

In many ways, it was acting without a net. Chandler’s character, Jack, is a police officer in a small town in 1979 that has to answer to the town’s citizens about their safety when an Air Force train crashes spectacularly in the community, sending the town into chaos. Jack is kept in the dark about the mystery as much as the audience has been about the subject matter of Abrams’ latest instant classic. Besides being sworn to secrecy, Chandler had the difficult task of not even being able to tell his family about the movie he was making.

Read on for more Super 8