J.J. Abrams relished the opportunity to celebrate the movies he made as a child with Super 8 film and he has done that and so much more with his brilliant Super 8. Abrams partnered with producer Steven Spielberg to make a science fiction film through the eyes of children as his hero and mentor mastered in the 1970s and 1980s with blockbusters E.T. and Close Encounters.

Super 8 is out in theaters and its mastermind, J.J. Abrams, has managed to keep the film shrouded in secrecy. J.J. Abrams took a few moments out of his incredibly busy schedule to dish his latest masterpiece, Super 8, and what it meant to him as a film fanatic and filmmaker to work with his Super 8 producer — the iconic Steven Spielberg. 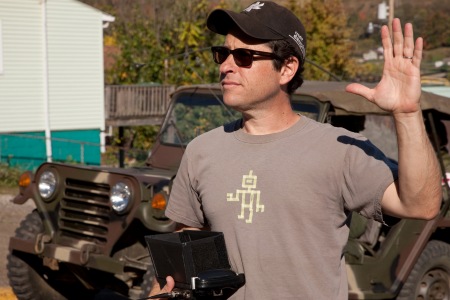 Super 8 is out in theaters and the buzz has been off the charts, and rightfully so. Abrams dishes not only Super 8, but also what’s next for the franchise he successfully rebooted, Star Trek.

Check out our five-star review of Super 8!>>

SheKnows: Was part of the connection you had with Steven Spielberg the fact that each of you began your film career by making Super 8 movies as kids?

J.J. Abrams: When I had this thought to go back and do a movie about that period of time, the first thing I did was call him because I knew that he had made movies as well, at that time. Luckily, he said yes.

SheKnows: Did you seek to pay homage to Spielberg with Super 8?

J.J. Abrams: The film was never intended to be an homage to anything. It was just meant to be a movie about these characters. That was the first thing that occurred to me. But, as I started working on the story, it was clear that this felt like it could be a movie that would live under the Amblin umbrella. And then, Steven himself said, “This should be an Amblin movie.” I don’t think an Amblin movie has ever had its title at the beginning of the film. The idea of it being one of those movies was freeing because suddenly I thought, “Oh, that’s what this movie is.” It is small town America, in that era, with these people, with these families, and with this otherworldly thing that is happening. There’s a little pang of guilt you get when you have kids jump on these BMX bikes. Can you really have kids on bikes? Well, if you’re doing a movie in 1979, what are they going to do? That’s what they did. They’re kids. It reminded me of doing Star Trek. Early on, I was like, “Can we really do lasers in space and spaceships flying? It seems so cliche and silly.” But, it’s Star Trek. Yes, we can do that. When else are we going to ever do that? So, getting to be another director who got to work on an Amblin movie, and there are a lot of them, it was this freeing feeling of being able to embrace those elements and those things that felt like they were naturally a part of it, mostly because, growing up as a kid, that felt like such a piece of that time and those films. There was no master list of movies that needed to be borrowed from, but it just felt like these were the characters and that was the world. So, when they got on their bikes, I felt like it was a celebration, as opposed to something to get over with quickly and be ashamed of, for borrowing heavily from E.T. or something.

SheKnows: How do you drum up support for a film, while still managing to keep much of it a secret? 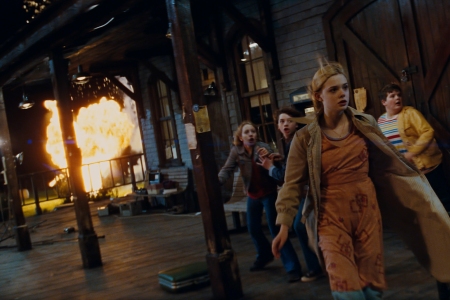 J.J. Abrams: Honestly, I trust you. I just feel like you see a trailer, and then it’s over and you feel like you’ve just seen the movie. Part of it was just about trying to allow people to have a sense of discovery, like when I went to the movies in 1979 and I didn’t feel like I’d seen every single detail of the film. Between clips, trailers, commercials, magazines and online, it just feels like people are force-fed so much stuff. Trying to keep it a little bit surprising for the audience still was part of the goal.

SheKnows: What was your inspiration for making Super 8?

J.J. Abrams: The thing about Super 8 was that it was inspired, initially, by the desire to go back in time and tell a story about being a kid, making those stupid movies on Super 8, that were often not quite as good as you would want them to be. The ambition was, at least, that you feel something. So, the ambience of it was less about the era, the wardrobe and the set and production design, which was all massively important, but what was really important to me was that all the visual effects stuff and action sequences, by default, take second place to what was going on with the characters. That was, at least, the goal of it.

SheKnows: Was it a challenging process working with so many child actors who had never worked before, except for Elle Fanning?

J.J. Abrams: It was tough, frankly, finding them because it’s not just a binary thing, where you’re casting one person. Even if you found that one person, it’s also about how they work with the other people we needed to cast, so part of it was the group. And Elle came in towards the end. We were looking for everyone. Just because she had done some work didn’t mean that it was a given. I had met her when she was around on the War of the Worlds set, as this little tiny baby sister of Dakota, so even the idea of Elle was like, “What?! She’s like one. She’s eight inches tall. There’s no way!” [Laughs] And then, when she came in and had more poise and sophistication than any of us, it was insane. I was like, “What?! She can’t be 12. It’s impossible.” And, it wasn’t like she had an attitude about it. She was just wise. The truth is that we saw thousands of kids, for months and months and months. Joel [Courtney] was great and Riley [Griffiths] as well. They were professional people who were young enough to be that age, and then acted that age. They were just those kids.

SheKnows: What’s immediately next for you? 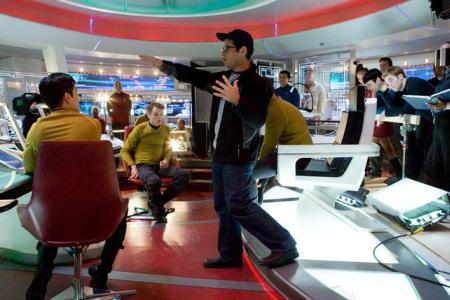 J.J. Abrams: Sooner rather than later is the next Star Trek.

SheKnows: Do you think it will be ready by its set release date?

J.J. Abrams: I care much more that it be good than it be ready. We’re obviously doing everything we can to make sure that schedules don’t get screwed up, but I don’t think anyone wants a movie on time that’s not worth your time.

SheKnows: Will it be more difficult for you to tackle the next Star Trek film because of the success of the first?

J.J. Abrams: I don’t think that’s been any kind of hindrance, or additional problem. But, I certainly think that we want to make sure that it’s done right. The guys we’re working with are obviously brilliant, so I’m really excited to get back into it. Super 8 has been something that I’ve been working on pretty closely, so it’s been hard to find the leisure time to discuss Kirk and Spock.