Kate Middleton got hacked! The newly-minted princess was a target in a UK hacking scandal. 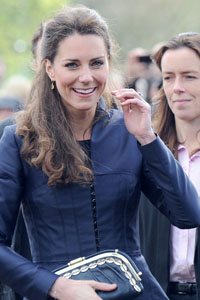 What a royal pain: Kate Middleton is the victim of hackers! The Duchess of Cambridge has been identified as one of many celebrity victims of a UK hacking scandal!

Kate Middleton’s mobile phone and bank account were both allegedly accessed by hackers working for private investigator Jonathan Rees, hired by News of the World.

The revelation comes just days after the rag gave an apology and monetary settlement to Sienna Miller for hacking her cell phone to gain information on her relationship with Jude Law.

It appears that Middleton was hacked back in 2008, but it is unknown what information was garnered or used.

Rees’ royal shenanigans were not limited to Kate Middleton. The PI also stands accused of hacking Prince Edward and the Countess of Wessex and the Duke and Duchess of Kent, as well as a multitude of other political and entertainment figures.

A spokesperson for News of the World says that just because the info was found in Rees’ office doesn’t mean the media group had anything to do with it.

“It is well documented that Jonathan Rees and Southern Investigations worked for a whole variety of newspaper groups. With regards to Tom Watson’s specific allegations, we believe these are wholly inaccurate. The Met police, with whom we are co-operating fully in Operation Weeting, have not asked us for any information regarding Jonathan Rees. We note again that Tom Watson MP made these allegations under parliamentary privilege.”

Off with their heads!