Top Chef Masters host Curtis Stone tells SheKnows that the best gift you can give your dad this Father’s Day is a meal cooked mano y mano!

Related story Target’s Big Spring Sale Is so Good, You Can Score a Grill for Under $20 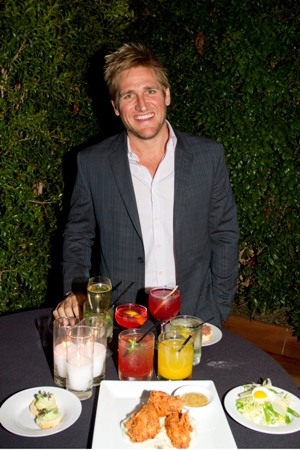 SheKnows caught up with celebrity chef Curtis Stone on the red carpet Wednesday night and the adorable Aussie gave us his recommendation for a fabulous Father’s Day meal.

“I think the best thing to do for Father’s Day is to grill,” Curtis told SheKnows at the grand opening of Lexington Social House in Hollywood. “That’s what your dad would probably like to do as well, and you should share the experience with him.”

The chef says it’s a great option because it makes an event out of the evening.

“You marinate the meats, open a few cold beers, do something nice for him, and then you cook with him,” said Curtis.

At home with girlfriend Lindsay Price, however, meal time is mainly a one person project.

“I do more of the cooking,” said Stone. “She sits at the bar and has a chat with me, but I cook.”

But it’s not because Price doesn’t know her way around the kitchen.

“She’s a good cook,” Stone told SheKnows. “She’s very methodical. She cooked me a beautiful chicken dinner the other night.”

Curtis and Lindsay have been dating since early 2010, and recently moved in together. But there won’t be much time for couples cooking this summer.

“I’m busy working, running around looking for a restaurant at the moment,” said Stone. “Nothing too fancy, nothing too massive. I want it to be special and focused on ingredients… treated with a lot of love in the kitchen.”

Readers weigh in: If you were Lindsay Price, what would you have hunky Curtis Stone whip up for you in the kitchen?

For more on sexy chef Curtis Stone, check him out on our Man Candy Mondays>>