Jon Cryer gave a surprisingly candid interview to David Letterman last night about Charlie Sheen and the effects of his behavior on Two and a Half Men. 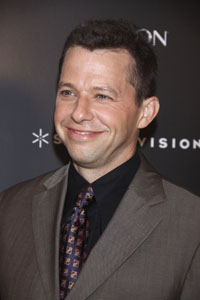 Jon Cryer has made some jokey statements in reaction to the complete and utter breakdown of Charlie Sheen, but he has finally given some serious statements on the situation. During an appearance on the Late Show with David Letterman, Cryer finally talked about his friendship with Sheen, the wild actor’s seeming meltdown and its effects on Two and a Half Men.

Cryer says despite Sheen’s harsh words, the two are pals. “I love him, he’s a great friend,” Cryer said.

Cryer replied, “Yes — as friends do!”

But Cryer says he was just as taken aback by Charlie Sheen’s bizarre behavior as the rest of us.

“Nobody was prepared for this, I didn’t see it coming, no one did,” Cryer said. “None of us wanted to continue with the show if we felt it was hurting him, and there was a point when everyone felt like… there was no control here.”

Two and a Half Men will continue with Ashton Kutcher taking over for Charlie Sheen, but the plot line of how that will happen has not yet been revealed.