She went out with a bang. Oprah Winfrey’s final show was viewed by 16.4 million viewers.

According to numbers released by Nielsen on June 8, the last episode of The Oprah Winfrey Show brought in 16.4 million viewers. The figure makes the finale her best showing in more than 18 years. 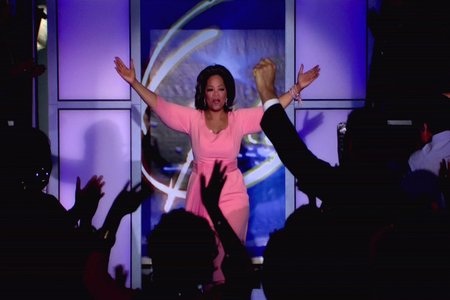 The last time she had numbers that strong was back in 1993 with an episode titled Why I Love Older Women, which was watched by 17.3 million viewers.

Early numbers released the day after her May 25 signoff, put the finale at a 13.3 household rating, which was higher than her Surprise, Oprah: A Farewell Spectacular numbers.

Executive producer and president of Harpo, Sheri Salata, told The Hollywood Reporter earlier in the year, “Oprah as we know it with a studio audience is over. We can’t do it any better than we’ve done it.”

She added, “I think you can expect to see Oprah out in the world, and having the look and feel very different. It’s about what Oprah is interested in exploring and interested in life.”

Have you been checking out Oprah Winfrey’s OWN network? What did you think of her Oprah Winfrey Show signoff? Was the simple look back through the years a bit too vanilla or were you expecting a big extravaganza like her blowout United Center party? Tell us, we want to know.