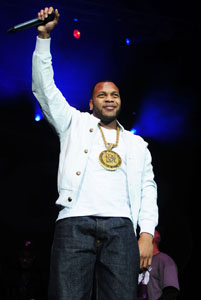 Flo Rida hit a new Low last night in Florida — the hip hop star was arrested on DUI charges when Miami Beach cops caught him swerving in one of the world’s most expensive cars.

No, he wasn’t getting his swerve on, he was driving erratically in a $1.7 million 2008 Bugatti. Flo Rida — real name Tramar Dillard — failed a field sobriety test after hopefully suggesting to cops he be allowed to do something besides walk in a straight line.

According to the police report, Flo Rida said to the arresting officer, “Officer, I can’t do this. I don’t feel I can walk a straight line. I had a few drinks. Let’s try another test.”

That doesn’t work, for the record.

Flo Rida’s blood alcohol level was .185 — more than twice the legal limit in Florida. In addition, he was also cited for driving with a suspended license after failing to pay a traffic fine.

SheKnows has reached out to Flo Rida’s reps for comment, but what we really want to know is how Flo Rida can afford a Bugatti after having only two popular songs in the last three years!