Looky there! It’s the infamous Rebecca Black in Katy Perry’s newest music video. What’s the singer of Friday doing in a music video her parents didn’t pay for?

Katy Perry has taken a clue from mock sensation Rebecca Black and created her own tribute to everyone’s favorite day of the week — Friday. 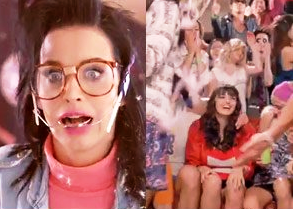 Rebecca Black can be spotted in the background of the preview clip (see below) for Katy Perry’s Last Friday Night. The video, which shows Katy’s geeked-out alter ego ‘Kathy Beth Terry’ attending a house-party, is set to debut June 14.

Keen eyes can see the Last Friday Night teaser video appears to be an homage to Rebecca Black’s Friday, with a school poster featured in the opening seconds of the clip that uses the same font as Rebecca’s homework book.

In Last Friday Night Rebecca looks on as Katy Perry gets her drink on, barfs into a rollerskate and has a major wardrobe malfunction — not exactly stellar behavior for 13-year-old Rebecca to be witnessing. Yet surely the video was much cheaper than the $4,000 her parents reportedly spent to have their daughter’s own video made.

Rebecca Black’s Friday video currently has an astounding 161 million views, while Katy Perry’s Last Friday Night teaser is up to 1.2 million views. Which “Friday” song do you think will come out on top?