Taylor Swift has fans who love the heck out of her — because of them the singer won Video of the Year at the CMT Awards!

Taylor Swift is winning! The young singer/songwriter took home the trophy for Video of the Year at the CMT Awards for her hit Mine. 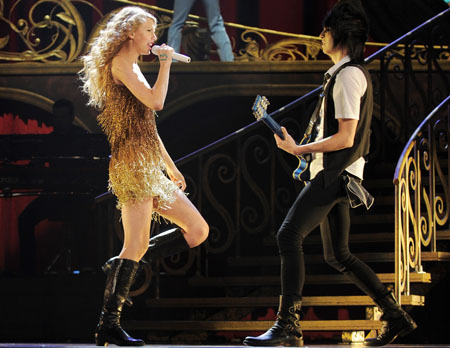 Swift couldn’t be there in person to accept her award, but instead said thank you via video uplink from Milwaukee, Wisconsin, at the current stop on her concert tour, surrounded by 15,000 fans.

“I wish I could be there, but I’m hanging out with 15,000 of my closest friends in Milwaukee,” Swift said as the fans screamed behind her.

The 21-year-old country superstar is on a winning streak lately, having won Entertainer of the Year at the Academy of Country Music Awards in April and picking up several prizes at the recent Billboard Music Awards, including Top Country Artist and Top Country Album.

read on for more Taylor Swift