LeAnn Rimes threw a benefit concert for the victims of the fatal tornado that destroyed the town of Joplin. 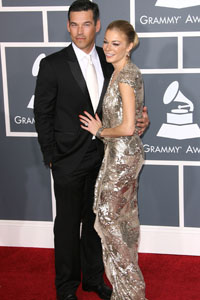 LeAnn Rimes took a break from updating her Twitter and not eating to do good. The singer and her new husband Eddie Cibrian threw a benefit concert with a silent auction to raise money for victims of the Joplin tornado.

The show raised over $30,000 for tornado relief with the help of auction items donated by Oprah, Faith Hill, Reba McEntire, Kim Kardashian, Kelly Clarkson, Justin Bieber, Taylor Swift and the cast of Glee.

LeAnn even became so emotional when talking about the victims that she broke down in tears — but that could be because the girl is obviously starving. The couple was not sad enough to keep their hands to themselves, though. Witnesses spotted them making out in their dressing room.

LeAnn said she was more than happy to do something to help. “We all need a hand sometimes and this is the time. Our heart goes out to Alabama and Missouri and all those affected by the recent tragedies there. I am happy Eddie and I can help out in some way.”