Neil Patrick Harris, Broadway and Hollywood are warming up for Sunday night’s Tony Awards. Host with the most NPH will get in on the show’s opening and closing numbers, while Stephen Colbert, Jon Cryer, Christina Hendricks, Patti LuPone, Martha Plimpton and more will perform a number from Company. Tony-nominated Best Musicals and past winners are also set to perform. Tony presenters include Alec Baldwin, Jim Parsons, Catherine Zeta-Jones, Kelsey Grammer, Harry Connick Jr. and more. 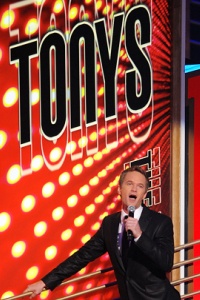 Hollywood is hitting the East Coast for the 65th Annual Tony Awards, the annual event that honors theater professionals for distinguished achievement on Broadway. Al Pacino, Edie Falco, Vanessa Redgrave, Billy Crudup, John Benjamin Hickey, Tammy Blanchard, Ellen Barkin, John Larroquette, Judith Light and Patti LuPone are just a few of the names that made the grade on stage and landed Tony nominations in 2011, but Sunday night is about more than just handing out the awards.

It’s time for Broadway to strut its stuff!

Performances include the 2011 Tony-nominated Best Musicals Anything Goes, Catch Me If You Can, How to Succeed in Business Without Really Trying, Sister Act, The Book of Mormon and The Scottsboro Boys.

Also taking the stage are the casts from 2010 Tony winner Memphis, Spider-Man: Turn Off the Dark, Ghetto Klown and Priscilla Queen of the Desert with Paul Shaffer and Martha Wash.