Stage producer Vivek Tiwary has secured unprecedented rights to the Beatles’ songs for his debut film, titled The Fifth Beatle, about Beatles producer Brian Epstein. The biopic, still in the early stages of production, will be the first film about the Beatles (other than Nowhere Boy), which has been allowed to use Lennon and McCartney’s songs as the soundtrack.

Broadway producer Vivek Tiwary is allowed to use Beatles songs in a movie estimated to cost $25 million, about the life of Beatles producer Brian Epstein, titled The Fifth Beatle. 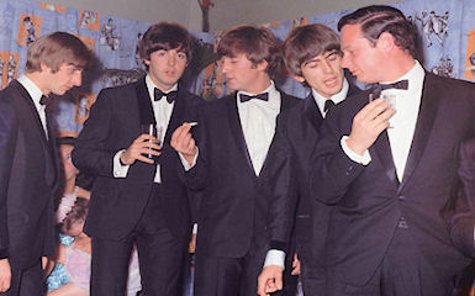 Tiwary (producer of The Addams Family, American Idiot) revealed to the Hollywood Reporter, “I have signed and fully executed a deal with Sony/ATV, who control the Lennon/McCartney music catalog, and I’m proud to report we will have Beatles music in our film.” While the surviving Beatles have not endorsed the project, their reps have signed off on the script and allowed music rights to be used.

According to Tiwary, “My guess is we’ll use six to 10 Beatles songs. We have the ironclad rights or ability to use the following songs, with the option to ‘swap out’ later for other songs if we decide to change the list: All You Need Is Love, You’ve Got to Hide Your Love Away, A Day in the Life, Sgt. Pepper’s Lonely Hearts Club Band, Yesterday, Eleanor Rigby, Help!, You Never Give Me Your Money, Girl, A Hard Day’s Night, Strawberry Fields Forever and Come Together.”

The film will detail Brian Epstein’s life as a closeted homosexual during the late ’50s and early ’60s, when it was illegal in England to live an openly gay lifestyle. It will also embrace Brian’s feelings of separatism from the Beatles, a band whom he helped shoot to superstardom, while also accounting for his feelings of romantic love for lead singer John Lennon. Epstein died of an overdose in 1967.

There have also been talks about a stage musical of The Fifth Beatle, as well as a graphic novel from Dark Horse Entertainment.

Revealed Tiwary, “I would love to start production this year. I won’t wait two years, but if the right director wanted us to shoot later, we have flexibility in financing.” It has been stated that Tiwary has a commitment from Nashville’s DIMI Entertainment to back the film.