The Supreme Court has rejected the appeal of Wesley Snipes’ tax case. 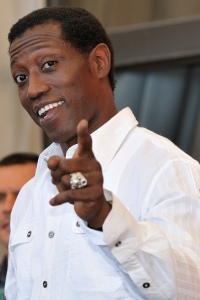 If only the Supreme Court were made up of vampires, Wesley Snipes might have had a chance.

Snipes, star of the Blade series, was turned down the opportunity to present his income-tax case to the Supreme Court on Monday and will continue to serve his 36-month prison sentence for willful failure to file his tax returns, according to the Los Angeles Times.

The Snipes camp argued that the actor’s constitutional rights were violated when he wasn’t allowed to explain why his case should have been tried in New York, where he claimed he lived, instead of Florida, where he’s a licensed driver.

Although Snipes, 48, was sentenced in 2008, he reported to federal prison in Pennsylvania on December 9. He asked if he could begin his sentence after the holidays but was denied.

Co-defendants Eddie Kahn and Douglas Rosile, who helped Snipes file false refund claims for millions of dollars from 1999 to 2005, were convicted in 2008 of felony tax fraud and conspiracy and received multiple year sentences.