Country music superstar Shania Twain has just signed on to a two-year deal to perform at Caesars Palace in Las Vegas. How much is the deal worth? 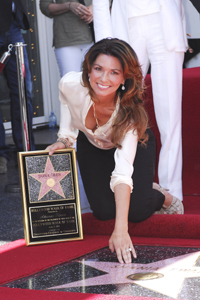 Shania Twain will start her reign in Las Vegas on December 1, 2012, when her show, Still the One, starts its two-year run at Caesars Palace’s Colosseum showroom.

“I will let my imagination run wild,” she told reporters. “I’m going to go nuts creatively.”

Twain, who married businessman Frederic Thiebaud earlier this year, said she has been thinking about a show in Las Vegas for quite some time.

“It was kind of a long drawn-out process,” she told the Wall Street Journal. “The idea came about through my manager, Jason Owen. He said ‘How would you feel about that?’ My first reaction was similar to a lot of reactions I’ve had in the last few years, which is ‘No, I can’t do that.’ Just sort of an anxious response… I decided I was getting tired of turning things away because I wasn’t feeling good about my voice and it was time to address it. Once I started that rolling, the decision to play at the Colosseum at Caesars began to evolve into a yes.”

As far as how much her deal is worth — Twain is remaining coy. “There are always various numbers anyways, and there’s no one number to these things. There’s productions numbers and artist numbers. It’s very difficult to pinpoint one number that people would even appreciate. It’s expensive to put on these shows, it’s expensive to get a top artist, and the whole thing is a big costly venture. That I can say.”