It looks like there’s a new guy in Scream 4 actress Hayden Panettiere’s life — and he’s actually close to her age! Panettiere, 21, has been spotted palling around with New York Jets wide receiver Scotty McKnight within the past few days. 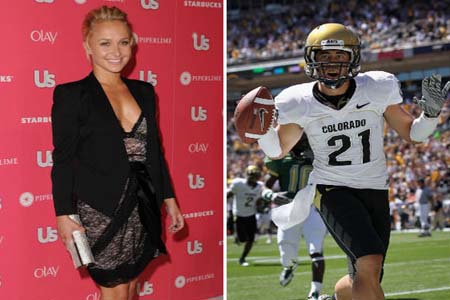 McKnight, 23, was spotted with Panettiere last week outside a West Hollywood restaurant, setting off speculation that the two are dating. Before that, rumors were swirling that she was actually dating McKnight’s teammate and lifelong friend, Mark Sanchez.

Panettiere quickly shot that down.

“I’m a huge Jets fan and became very good friends with Mark and his buddies,” Panettiere told Us Weekly on June 2. “I’ve always been that girl who has a lot of dude friends. I’m into sports so we have a lot in common.”

McKnight isn’t her first sporty guy: She was dating the huge Ukrainian boxer Wladimir Klitschko, 35, up until a few weeks ago. Before that, she dated her 33-year-old Heroes co-star Milo Ventimiglia.

We’re pleased that she’s getting into dudes who are much closer to her age. She’s young and needs to have fun, not worry about whether or not her boyfriend wants to settle down and have children.

Plus, he’s closer to Panettiere’s height than Klitschko was. Yeah, yeah — we’re worried about that superficial stuff. You were thinking it too, admit it!

Do you think Hayden Panettiere and Scotty McKnight make a cute couple?

Read on for more Hayden Panettiere