It’s another interesting day in the life of New York Congressman Anthony Weiner and Weinergate — his wife is pregnant! 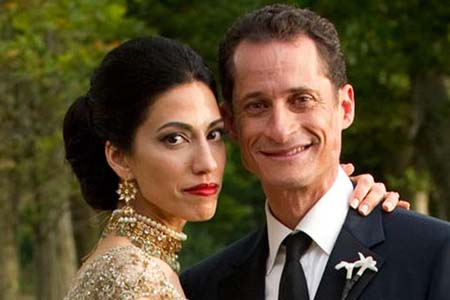 The New York Times reported Wednesday afternoon that Huma Abedin, Weiner’s wife of one year, is expecting a child later this year. Her “with child” status explains why Weiner recently put his two-bedroom Queens apartment up for sale.

Abedin is about three months pregnant, according to Gawker. She’s remained conspicuously absent from all of the scandal surrounding her husband’s brainless sexting escapades with various women around the country.

We wonder if Jon Stewart will slice his other wrist in response to this news?

“We will weather this,” Weiner said on Monday during his tearful mea culpa. “I love her very much, and she loves me.”

Ugh. What an unfortunate time for all of this to happen to Abedin — especially since the early months of pregnancy are some of the most tenuous for expectant mothers. She’s reportedly back to work with Secretary of State Hillary Clinton and on her way to North Africa.

Let’s just hope she’s staying with the Weiner because she wants to, not because she feels like she has to.

Do you think Huma Abedin should stay with Anthony Weiner?