Newly engaged Kim Kardashian picked up the Entrepreneur of the Year award at the Glamour Women of the Year Awards in London. 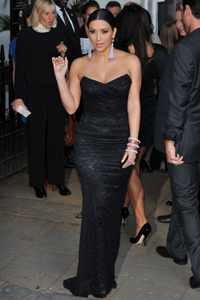 Thanks to her reality shows, Keeping Up with the Kardashians and Kourtney and Kim Take New York, as well as her multiple endorsement deals, fragrance deal (and the list goes on), Kim Kardashian was awarded the Entrepreneur of the Year award at the Glamour Women of the Year Awards in London.

The Kardashian family, with mom Kris Jenner in charge, reportedly made $65 million in 2010. Kim is rumored to make $10,000 per tweet for the products she endorses, including Bebe and QuickTrim, to name a few.

One example of her endorsement-heavy tweets is, “I’m on my way to Century City wearing a dress from my new Bebe line that comes out next month! And ShoeDazzle shoes of course!”

Kim defends her paid tweets, saying: “I want my fans to know what products, gadgets, foods, clothes and beauty products I like and I love sharing all that with my fans.”

Kristen Stewart was at the event and was seen hanging out with Country Strong actor Garrett Hedlund, who picked up the Man of the Year award.