Mark Wahlberg’s Oscar-nominated biopic The Fighter is getting a new lease on life. The producer and star of the film has said on more than one occasion that he plans on making a sequel to the film, and at last weekend’s Guys Choice Awards he announced it to the world!

At this year’s ceremony, The Fighter won the trophy for Guy Movie of the Year. Mark Wahlberg, director David O. Russell and several of the producers took to the stage to pick up their golden antlers. It was there that the actor revealed that we haven’t seen the last of Micky Ward on the big screen. 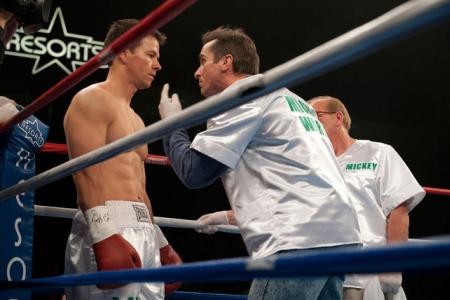 One of the major criticisms The Fighter received from the boxing community was the exclusion of Arturo Gatti and his well-publicized battles with Ward. In Mark Wahlberg’s acceptance speech he said, “We’re not going to do Fighter 4, 5, 6, 7 and 8, but we’re going to do 2. We’re going to do the Ward-Gatti trilogy.”

It sounds like the critics’ cries have been heard and Wahlberg and his crew are going back to the drawing board. Even though The Fighter is a great stand-alone film, it seems as if the sequel will have more to do with pleasing hardcore boxing fans than the general public.

Either way, we’re interested in seeing where this goes. Do you think David O. Russell and Mark Wahlberg can pull this off? We, for one, are excited to see Christian Bale reprise his role that won him an Oscar and always adore Amy Adams.

Read on for more The Fighter